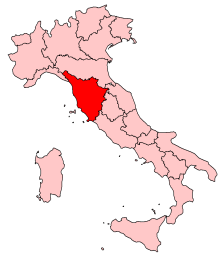 Tuscan wine (Italian Toscana) is Italian wine from the Tuscany region. Located in central Italy along the Tyrrhenian coast, Tuscany is home to some of the world's most notable wine regions. Chianti, Brunello di Montalcino and Vino Nobile di Montepulciano are primarily made with Sangiovese grape whereas the Vernaccia grape is the basis of the white Vernaccia di San Gimignano. Tuscany is also known for the dessert wineVin Santo, made from a variety of the region's grapes. Tuscany has forty-one Denominazioni di origine controllata (DOC) and eleven Denominazioni di Origine Controllata e Garantita (DOCG). In the 1970s a new class of wines known in the trade as "Super Tuscans" emerged. These wines were made outside DOC/DOCG regulations but were considered of high quality and commanded high prices. Many of these wines became cult wines. In the reformation of the Italian classification system many of the original Super Tuscans now qualify as DOC or DOCG wines (such as the new Bolgheri label) but some producers still prefer the declassified rankings or to use the Indicazione Geografica Tipica (IGT) classification of Toscana. Tuscany has six sub-categories of IGT wines today.

Super Tuscans are an unofficial category of Tuscan wines, not recognized within the Italian wine classification system. Although an extraordinary number of wines claim to be “the first Super Tuscan,” most would agree that this credit belongs to Sassicaia, the brainchild of marchese Mario Incisa della Rocchetta, who planted Cabernet Sauvignon at his Tenuta San Guido estate in Bolgheri back in 1944. It was for many years the marchese’s personal wine, until, starting with the 1968 vintage, it was released commercially in 1971.  The growth of Super Tuscans is also rooted in the restrictive DOC practices of the Chianti zone prior to the 1990s. During this time Chianti could be composed of no more than 70% Sangiovese and had to include at least 10% of one of the local white wine grapes. Producers who deviated from these regulations could not use the Chianti name on their wine labels and would be classified as vino da tavola - Italy's lowest wine designation. By the 1970s, the consumer market for Chianti wines was suffering and the wines were widely perceived to be lacking quality. Many Tuscan wine producers thought they could produce a better quality wine if they were not hindered by the DOC regulations.

The marchese Piero Antinori was one of the first to create a "Chianti-style" wine that ignored the DOC regulations, releasing a 1971 Sangiovese-Cabernet Sauvignon blend known as Tignanello in 1978. He was inspired by Sassicaia, of which he was given the sale agency by his uncle Mario Incisa della Rocchetta. Other producers followed suit and soon the prices for these Super Tuscans were consistently beating the prices of some of most well known Chianti. Rather than rely on name recognition of the Chianti region, the Super Tuscan producers sought to create a wine brand that would be recognizable on its own merits by consumers. By the late 1980s, the trend of creating high-quality non-DOC wines had spread to other regions of Tuscany, as well as Piedmont and Veneto. Modification to the Chianti DOC regulation attempted to "correct" the issues of Super Tuscans, so that many of the original Super Tuscans would now qualify as standard DOC/G Chianti. Most producers have brought their Super Tuscans back under legal regulations, notably since the creation of the less restrictive IGT Toscana designation in 1992 and the DOC Bolgheri designation in 1994, while the pioneer Sassicaia was prized with its own exclusive Bolgheri Sassicaia DOC.

In addition to wines based on the Sangiovese grape, many well known Super Tuscans are based on a "Bordeaux-blend", meaning a combination of grapes typical for Bordeaux (esp. Cabernet Sauvignon and Merlot). These grapes are not originally from the region, but imported and planted later. The climate in Tuscany has proven to be very good for these grapes.