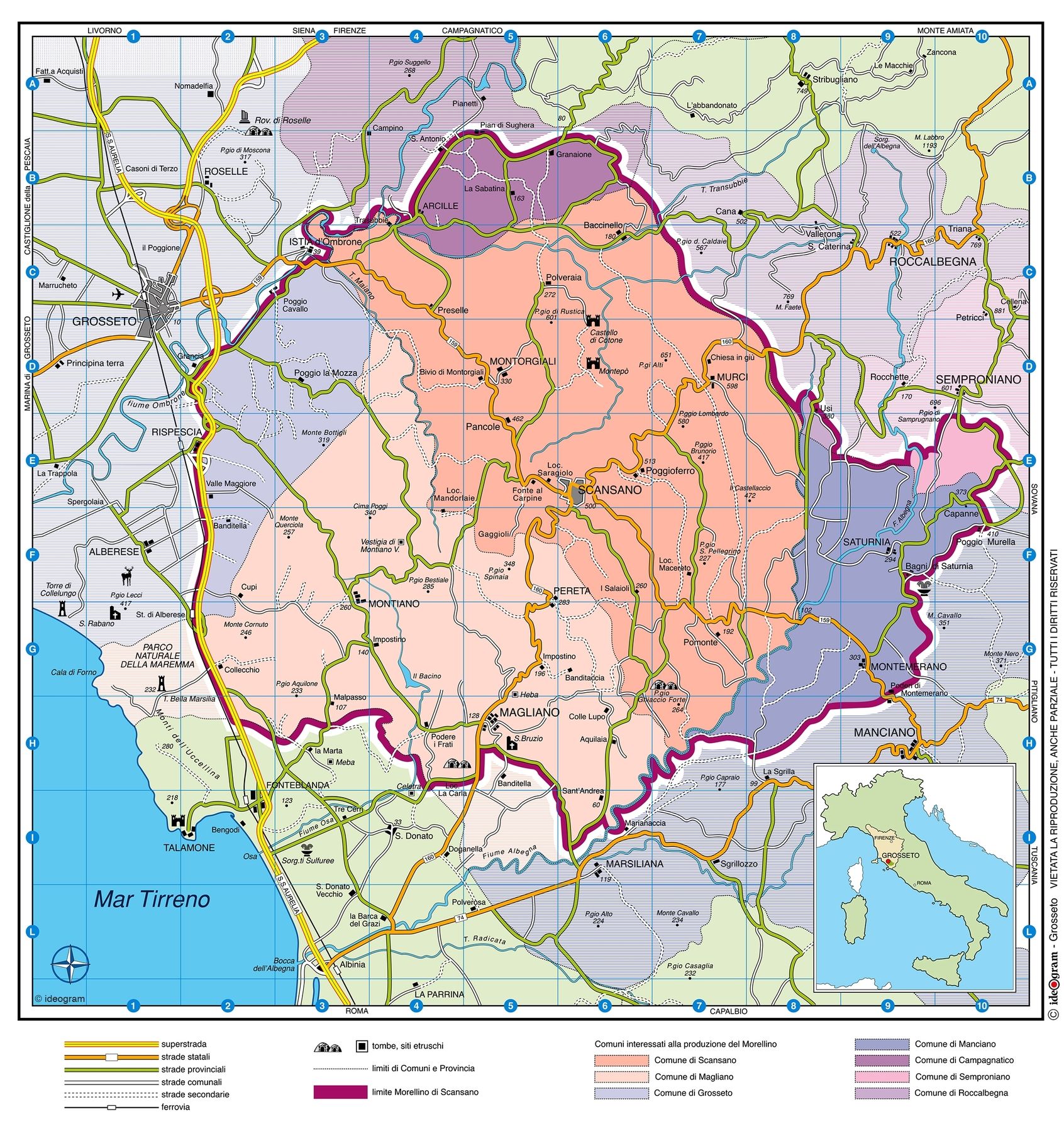 Morellino di Scansano became a Denominazione di Origine Controllata e Garantita (DOCG) recognized wine starting with the 2007 harvest.
The addition of the “garantita” to the title which was bestowed on the Consorzio in 1978, DOC, is the result of the labor of producers and growers over the last 30 years in order to reach an exceptional level of quality at every stage of wine production.

In order to conform to traceability standards, the Consorzio is now using the State seal instead of the one that was previously used by the Consorzio starting in 2004.

The use of the seal is a sign of protection for the consumer, be it the State seal or the Consortium seal.

The procedural guidelines imposes Sangiovese as the main grape variety for Morellino di Scansano, which can be integrated with 15% of other grape varieties, the traditional Canaiolo, Ciliegiolo, Malvasia, Colorino, Alicante and most recently also Merlot, Cabernet, Syrah and other internatonal dark-skinned grape varieties.

The Vintage style of Morellino has ruby colour, it’s fruity and winy at the nose, fresh and savory at the palate but also smooth with a little tannin. It’s a fresh wine that can sold the year after the harvest.

The Riserva style of Morellino di Scansano (two years of ageing) has garnet colour, fruity aroma (cherry, red fruits and plum) and notes of spice and vanilla. The palate is dry, full-bodied, slightly tannic and smooth.

Numerous archeological finds dating back to the Etruscan period brought to light in the areas of the Scansano and Albegna valleys: Earthenware jars containing Vitis Vinifera seeds dating back to the fifth century BC. Bronze statuettes of offerers holding sickles, the standard tools of vintners until almost the present day, are just some of the artifacts found in the rural area of the Usi, which includes the towns of Scansano and Semproniano, and at the site of Ghiaccioforte, an area between Scansano and Saturnia. It is precisely with the conquest of the fortress of Ghiaccioforte, circa 280 BC, that the Romans took possession of the territories of Scansano and furthered its agricultural development through the creation of numerous colonies. Here, wine destined for the western provinces of the empire was produced, as evidenced by the discovery of the wreckage of a ship in the sea off the coast of Marseille. In fact, the wreck contained a large number of wine amphorae marked with the letters SES, the initials of the powerful Roman Sestii family, traders and landowners in the area of Cosa, present-day Ansedonia.

Historical area of production: the municipality of Scansano and part of Campagnatico, Grosseto, Magliano in Toscana, Manciano, Roccalbegna, Semproniano.

All vinification steps must be made within the area of production of the grapes, as reported on 1978 procedural guidelines.

Bottling also must be made within the area of production of the grapes, except for the wineries that historically bottled Morellino di Scansano outside the are of production, before the DOCG recognition.

In 1992 a small group of producers determined to promote their wine decided to form the Consorzio Tutela del Vino Morellino di Scansano.